The music and dance forms of the African diaspora include African-American music and many Caribbean genres, such as soca, calypso and zouk. Latin American music genres such as the flamenco, samba, rumba, salsa, and other clave (rhythm)-based genres, were founded to varying degrees on the music of enslaved Africans, and have in turn influenced African popular music.

African traditional music is frequently functional in nature. Performances may be long and often involve the participation of the audience. There are, for example, little different kinds of work songs, songs accompanying childbirth, marriage, hunting and political activities, music to ward off evil spirits and to pay respects to good spirits, the dead and the ancestors. None of this is performed outside its intended social context and much of it is associated with a particular dance. Some of it, performed by professional musicians, is sacral music or ceremonial and courtly music performed at royal courts.

Egypt has long been a cultural focus of the Arab world, while remembrance of the rhythms of sub-Saharan Africa, in particular West Africa, was transmitted through the Atlantic slave trade to modern samba, blues, jazz, reggae, hip hop, and rock.The 1950s through the 1970s saw a conglomeration of these various styles with the popularization of Afrobeat and Highlife music.

Modern music of the continent includes the highly complex choral singing of southern Africa and the dance rhythms of the musical genre of soukous, dominated by the music of the Democratic Republic of Congo.

Founded in 1954, ILAM is the greatest repository of African music in the world. A research institution devoted to the study of music and oral arts in Africa, it preserves thousands of historical recordings going back to 1929 and supports contemporary fieldwork.

The Afro-Euro hybrid style, the Cuban son, has had an influence on certain popular music in Africa. Some of the first guitar bands on the continent played covers of Cuban songs. The early guitar-based bands from the Congo called their music rumba (although it was son rather than rumba-based). The Congolese style eventually evolved into what became known as soukous 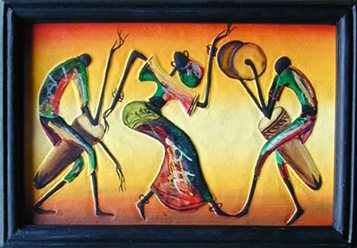 Time to Listen – check out these great performers